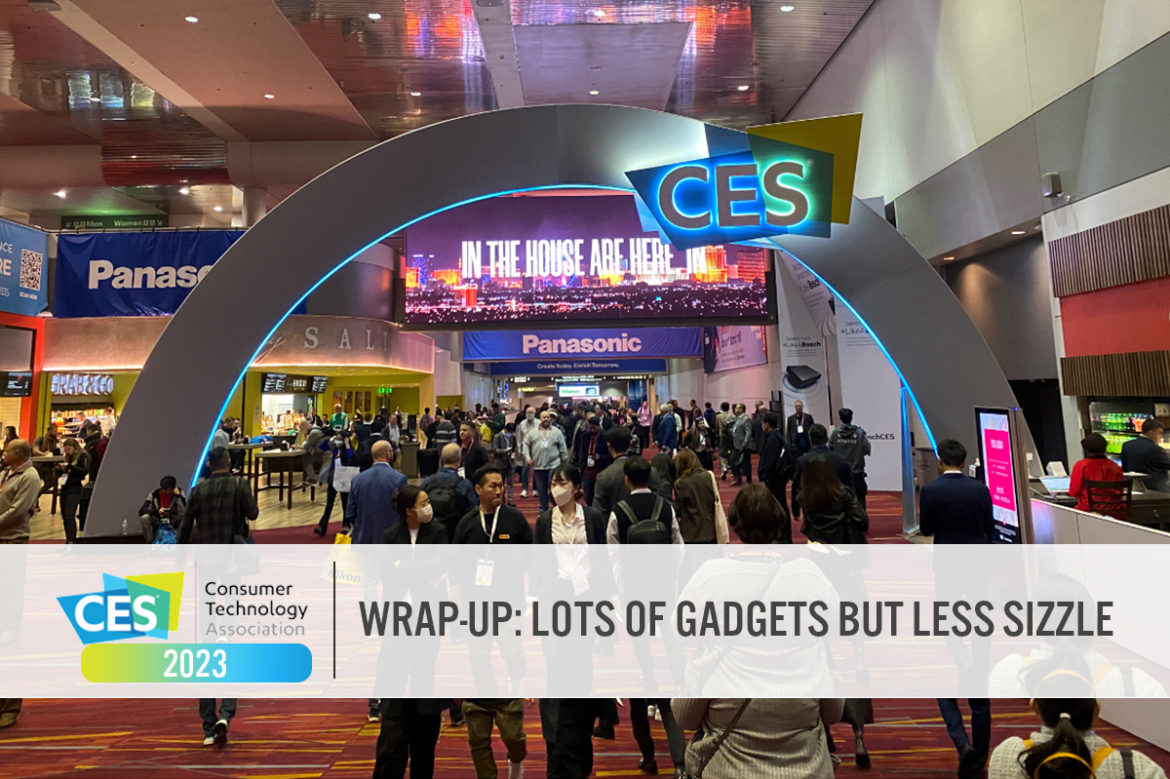 The Coresight Research team attended CES 2023 in Las Vegas on January 5–8, 2023. In this report, we present insights and highlights from the event.

We review opportunities for retailers presented by Deborah Weinswig, CEO and Founder of Coresight Research, and cover new health and wellness gadgets, the conference’s social direction, self-driving and electric cars, augmented reality and adaptive consumer technology, and a focus on air quality.

This report is available for free and can be accessed by registering for a free account.

The Coresight Research team attended CES (formerly the Consumer Electronics Show), hosted by the Consumer Technology Association (CTA) in Las Vegas January 5–8, 2023. The event brought together technology vendors, innovators, retailers and people from around the world to get an early look at key consumer electronics trends in the new year. The scope of CES has expanded in recent years beyond electronic gadgets to encompass new areas such as healthcare, wearable devices and mobility. This year, the show had a strong metaverse focus.

In this report, we present our top 10 insights from the full event.

The technologies presented at CES tend to run in cycles: a new technology is introduced, then applications are developed during the next five or so years. Recently introduced or perfected groundbreaking technologies include artificial intelligence (AI), robotics, cloud computing and 5G wireless technologies, although 2023 saw examples of the metaverse in earnest.

Steve Koenig, VP of Research at CTA, emphasized that economic downturns result in surges in technological innovation. Koenig remarked that we are in the early stages of one trend in enterprise tech innovation—featuring transformation of the enterprise—and on the cusp of another one, centered on automation and virtualization, as illustrated below.

Although an in-person CES did take place last year, many large tech companies canceled due to concerns surrounding the Omicron variant, which had emerged in the fall, and 45,000 people attended CES, a fraction of the 171,000 attendees seen in 2020.

The CTA expected 100,000 attendees in 2023, though we heard whispers of actual attendance of two-thirds that figure. The attendance of the Media Days was light at first but picked up toward the end. In any case, speakers and attendees rejoiced at the ability to meet in person again, and CTA offered to host the keynotes online through the end of February for those still reluctant or unable to attend in person.

The photo below shows the mob of people awaiting the opening of the doors to the Eureka Park area on the first day of the show.

CES undertook a change in direction in 2023, pivoting from technologies into more social themes. Key social themes at the conference presented by the CTA, companies and speakers included the following:

While Mercedes-Benz demonstrated a self-driving concept car at CES 2019, this technology has not yet hit showrooms due to the technological and social complexity of such a vehicle. However, the technology continues to evolve and pilot testing continues. Although the technology has been demonstrated to work and robot drivers are possibly better than human ones, autonomous passenger vehicles will need to operate with near perfection to receive acceptance.

In the meantime, CES has broadened the concept of autonomous vehicles to include vehicles that travel on land, sea and air. We saw a delivery robot from Ottonomy that is currently in use in airports. The newest model (Yeti) can drop off packages.

At last year’s CES, Nvidia gave a presentation outlining its products and strengths for outfitting the interior of future electric vehicles, and that technology continues to advance.

We spent time in a prototype made by Qualcomm that offers interior sound, video and even the ability to modulate sound volume for each passenger. The vision of the future is that passengers will listen to music, watch videos, access the Internet, shop and even be able to play video games inside a vehicle.

At the Covesa showcase, which was dedicated to products for electric vehicles, we saw Mavi.io, which offers a platform for in-car commerce, and the photo below shows ordering food on a vehicle entertainment system. We also saw a company at a showcase that offers an in-car karaoke system by Singing Machine.

While many software developers anticipate that virtual reality (VR) will be the most immersive portal to the metaverse and Web 3.0, many solutions seem to be concentrating on augmented reality (AR) technologies, which offer comparable degrees of immersion but also powerfully link the real and virtual worlds. There were numerous examples of cutting-edge AR solutions and technology at CES, and we believe that individuals will reach the metaverse more easily and practically by using AR.

We saw wearable tech at CES back in 2015, yet wearable tech today is largely the domain of smartwatches, fitness trackers and purpose-specific devices. Since then, available products have evolved into a broad spectrum of truly helpful and useful devices, including the following:

We saw several products at CES that were adaptive or developed specifically to help target groups, such as seniors.

It is understandable that consumers are more interested in indoor air quality, as we continue to contend with a variety of old and new respiratory viruses. Gadget makers have responded to this perceived demand, and we viewed a variety of devices designed for indoor air monitoring, air improvement and protection against airborne disease.