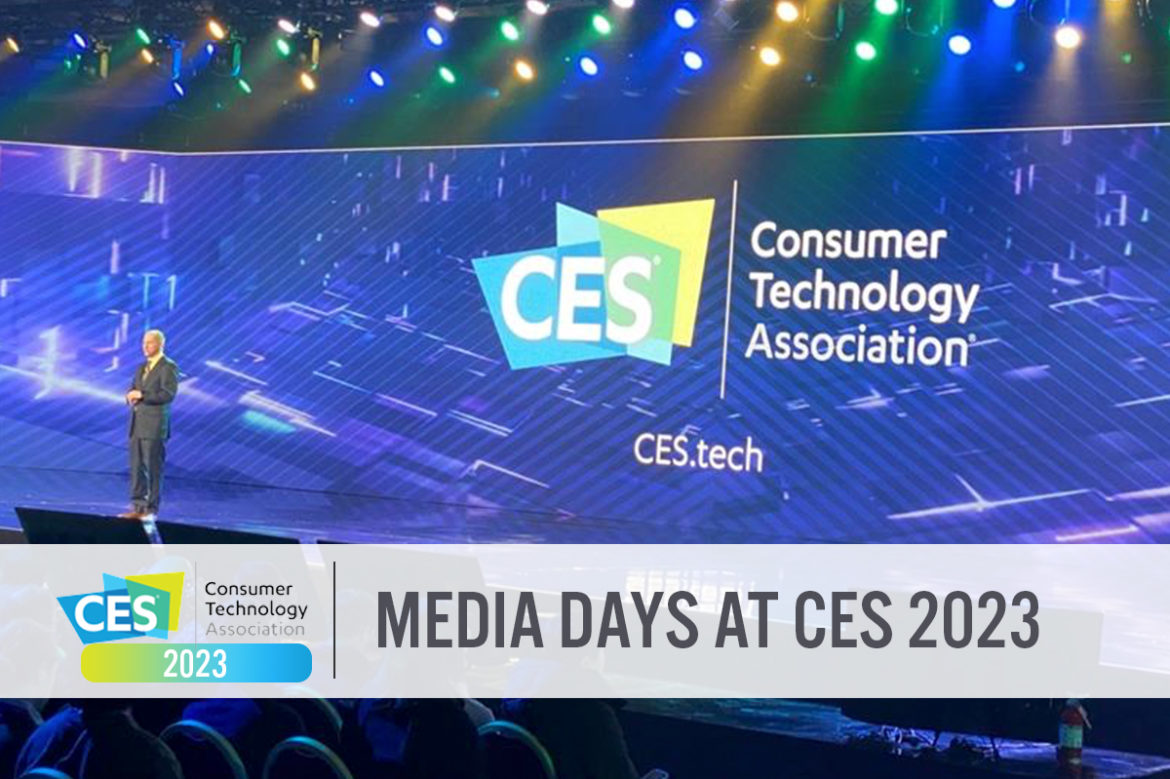 The Coresight Research team is attending CES 2023 in Las Vegas. In this report, we present insights from the Media Days preceding the event proper, held on January 3–4, 2023.

Look out for our ongoing coverage of CES 2023 through the remainder of the event.

This report is available for free and can be accessed by registering for a free account.

The Coresight Research team is attending CES (formerly the Consumer Electronics Show), hosted by the Consumer Technology Association (CTA) in Las Vegas from January 3, 2023, with the exhibits running during January 5–8, 2023. The event brings together technology vendors, innovators, retailers and people from around the world to get an early look at key consumer electronics trends in the new year. The scope of CES has expanded in recent years beyond electronic gadgets to encompass new areas such as healthcare, wearable devices and mobility. This year, the show has a strong metaverse focus.

In this report, we present insights from the Media Days preceding the event proper, held on January 3–4, 2023.

CTA highlighted that the development of 6G, beginning in 2024, will improve capacity, data throughput and latency. In addition, CTA stated that innovation in cybersecurity, cloud computing and AI (artificial intelligence)/robotics will work toward achieving security, scalability and simulation capacity. CTA argued that the cybersecurity ecosystem will greatly expand, becoming an industry unto itself.

To tackle supply chain and operational efficiency challenges, enterprises will adopt logistics and warehouse automation capabilities, improving productivity and worker safety, and reducing costs through optimizing uptime and floor space, according to CTA.

Set to be one of the major themes at CES this year is the metaverse, and CTA predicts more innovation in metaverse applications and business strategies in 2023. CTA spoke of the Metaverse of Things (MoT), which will deliver the next generation of the Internet through enhanced virtualization, enabling consumers to engage in virtual spaces in an individualized way, as well as enhanced immersion, enabling enterprises to engage in virtual scenarios. For example, Touchcast, an innovator in metaverse space, provides metaverse as a service, providing a virtual space with a live person, which is notably applicable to shopping scenarios too. CTA shared that as a business strategy, the metaverse will function in a similar way to the current iteration of the Internet, enabling communication, collaboration and transactions.

Select innovators in these areas include the following:

In ag-tech, CTA presented the “Farm of the (Near) Future,” which features intelligent silos, drones and soil sensors, satellite and terrestrial 5G, farming robots, a connected farm and offsite farm analysis platforms.

CTA released its latest “Future of Gaming” study, an update to the study it conducted in 2019. The study found that the US gaming market comprises 164 million gamers, aged 13–64, who spend an average of 24 hours per week gaming. These consumers are seeking entertainment, escapism and competition but also increasingly connection and socialization. Technology application will bring this desired connection through upgrades to hardware, displays, haptics and the metaverse, according to CTA.

Technology conglomerate LG announced a range of new launches and initiatives during its press conference at CES. The company’s s sustainability and accessibility initiatives include its new “Life’s Good” program, which seeks to support the development of sustainable tech solutions, including desalination technologies, plastic alternatives, bioplastics and devices for the visually impaired. LG’s ESG (environmental, social and corporate governance) initiatives are guided by its “Better Life Plan 2030,” which seeks to use 600,000 tons of recycled plastic and achieve carbon neutrality by 2030 and transition to 100% renewable energy by 2050. LG is also working to improve the accessibility of its products, adding voice guidance for the visually impaired and developing a sign language engine for the hearing impaired.

Alissa Baker, US Home Appliance Product Manager at LG, announced a new LG Refrigerator with MoodUp, a customizable and interactive refrigerator with features such as InstaView, which enables users to knock twice to see inside. Other products announced include the LG Styler ShoeCase and LG ShoeCare, which use steam technology to sanitize and deodorize shoes.

On the automotive side, LG proposed re-envisioning the car as a living working space, which can be integrated into daily life. The company is developing a cockpit computer with a telematics communication module, an automotive display and an automotive vision system.

David Gold, President of Hisense USA, claimed that electronics company Hisense has exceeded industry growth and achieved superior quality, receiving 50 awards last year. He stressed Hisense’s growing international presence: the company sells products to 160 countries and regions. It has a number-one TV in China and has made acquisitions of global brands including Toshiba TV, Gorenje and Sanden.

Panasonic kicked off its press conference by discussing its Green Impact Plan, which aims to achieve net-zero emissions by 2030. The plan outlines key priorities, including increased usage of recycled materials, reduced emissions and the implementation of hydrogen technology—Panasonic has developed the first full-scale hydrogen fuel plant.

The company also discussed a range of updates:

Autonomous robot startup Ottonomy unveiled its newest model of delivery robot, Yeti, which can achieve unattended deliveries by dropping packages at a doorstep or by transferring them into lockers, meaning it does not require a human present. Yeti is highly maneuverable, weighs about 200 pounds and has a battery life of four to five hours. According to Ottonomy, its biggest challenge is to keep up with demand, as it sees 10–15X growth as achievable.

Canon announced that Kokomo, a VR video calling software, will be available next month. Mike Larson, Senior Fellow, New Business Acceleration at Canon, discussed Free Viewpoint, software that enables a better viewing experience at sporting events by offering limitless perspectives, enabling fans to control what, who and how they watch. The software is already in use by the NBA at two arenas, including the homes of the Cleveland Cavaliers and the Brooklyn Nets.

Jason Mack Williams, co-creator of Kokomo, discussed Canon’s MREAL technology, which is still in the market research phase. MREAL is a mixed-reality (MR) visor, and Canon is exploring business and industrial use cases for the product.

OVR Technology unveiled its ION3 device, a wearable scent device that marks the first consumer product available from OVR. The device is associative, wireless and adjustable for comfort. The device features a scentware cartridge with eight primary aromas (soft, fresh, earthy, green, citrusy, floral, sweet, woody) that can be trigged individually or combined to create thousands of different combinations. These rich and complex scents provide variety unique to the digital world, according to the company. OVR’s scent studio enables users to create their own aromas, which can then be combined with other media. OVR uses a subscription service that includes Bluetooth, a micro-electric tray, a scentware cartridge, a mobile creation studio and software developer plugin.

TCL announced that it will be moving forward with two TV series: its Q-Series and S-Series. The S3 model is smart and versatile, with 1080p full HD resolution, HDR and Bluetooth personal audio. The S4 model features 4K ultra-HD, Dolby Vision and frame insertion. TCL’s Q-Series includes the Q6, Q7 and QM8, which include features such as enhanced color, quantum dot technology and improved brightness. The QM8 model is TCL’s mini-LED flagship, with high bright ultra-display, two times peak brightness and over five times the number of local dimming zones.

Inhee Chung, VP of Samsung’s Corporate Sustainability Center, shared that Samsung’s smart home system was awarded the industry’s first Smart Home Energy Management Systems (SHEMS) certification. Chung shared upgrades to SmartThings Energy’s AI Energy Mode, which now supports more devices and increased reduction in energy usage. Samsung also unveiled new features of its net zero home initiative, including increased usage of solar panels and batteries and energy-saving appliances to produce, store and use energy more efficiently. Samsung also discussed the results of its partnership with Patagonia to address microplastics. Samsung has developed washing machine technology to reduce the release of microplastics by up to 54%. The cycle technology is now available in Europe and will be available in Korea soon.

Jaeyeon Jung, EVP and Head of SmartThings, unveiled the launch of SmartThings Station, a smart home hub and fast charging pad. The device includes a programmable button, enabling the device to turn off lights or change the temperature. SmartThings Station is compatible with Matter devices, improving home connectivity and convenience for users.

Alana Gomez-Solis, Communications and Content Specialist at Samsung, discussed other features of SmartThings, including pet care, enabling users to check on pets when not home. Other features include Smart Trainer with Samsung Health on TV, SmartThings Cooking with a connected oven and Family Hub+. Gomez-Solis announced a new Family Hub+ with a 32-inch screen, which can be used to control other SmartThings devices, watch TV, stream music and more.

Samsung unveiled a new feature for TV, Relumino Mode, designed to improve accessibility for the visibly impaired by improving contrast and color.

Omron has rolled out educational updates to the Omron Connect App, including studies, articles and recipes. The app also now allows any user to designate a care team. Omron plans to launch community features to enable users to connect, as well as a challenges feature for exercise-related goals with daily rewards later this year.