CES 2023 Preview: Metaverse To Be Pervasive in Las Vegas in January 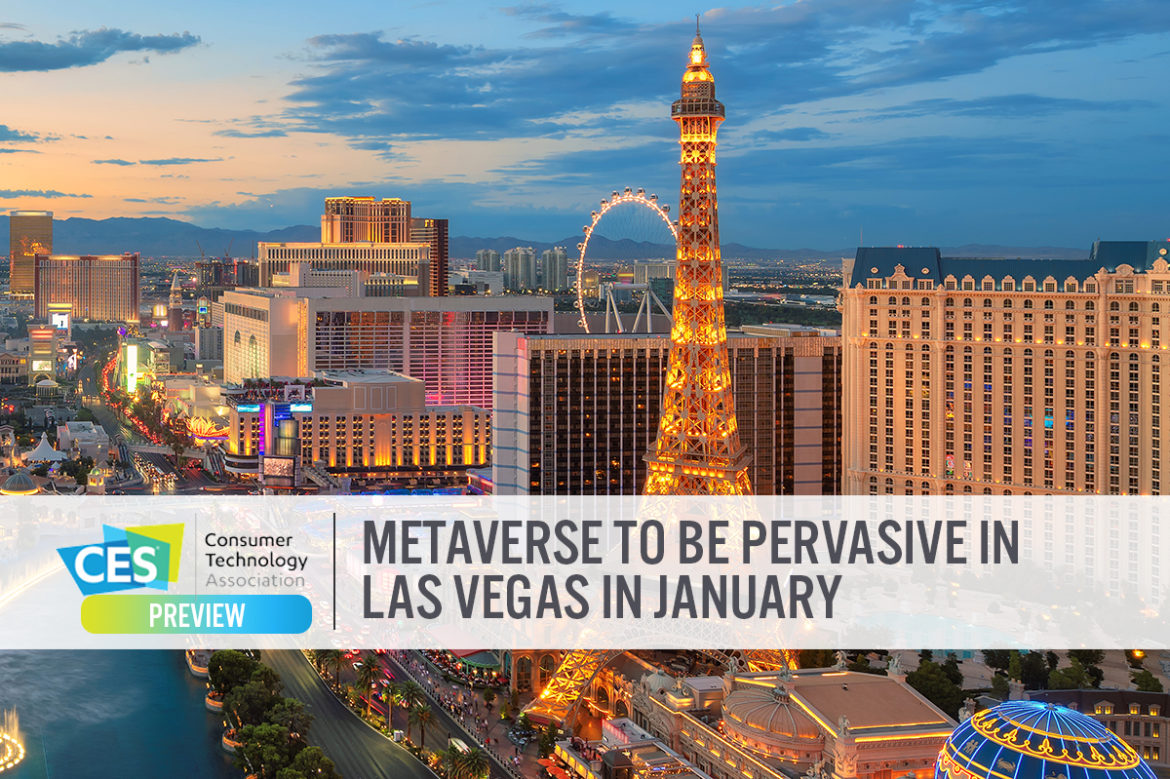 The Coresight Research team will be attending CES in January 2023 in Las Vegas, Nevada. In this report, we present a preview of the show, produced by the CTA, based on insights from the CES Unveiled conference on November 16, 2022.

We expect the metaverse to be the star of CES 2023, with a large section of a hall devoted to its applications, tools and infrastructure, as well as a plethora of gadgets in the product showcases. The health-tech category continues to broaden, encompassing sleep tech, mental health, telehealth and remote monitoring. The prior focus on autonomous cars has also been expanded to incorporate all kinds of air, land and sea vehicles.

The Coresight Research team will be attending CES (the consumer electronics show) during January 3–8, 2023 in Las Vegas, Nevada. The show is produced by the Consumer Technology Association (CTA).

The exhibits portion of CES will be held during January 5–8, 2023, following two Media Days for media and industry analysts on January 3–4. The Coresight Research team will attend the media events, including press conferences and keynote addresses, as well as meet with innovators and other companies exhibiting on the show floor.

In this report, we present a preview of the show based on insights from the CES Unveiled conference (which bears the same name as the product showcase that we will attend as part of the main CES event in 2023) on November 16, 2022.

According to CTA, CES 2023 will feature more than 200 sessions. It is on track to reach its goal of 100,000 attendees, and 2,500 media representatives are already registered.

We believe that there are two types of CES shows: those in which blockbuster new technology is announced and those in which applications and refinements of those technologies are announced. We expect CES 2023 to be evolutionary, rather than revolutionary, with one exception: the metaverse.

We expect Web 3.0 technologies to be pervasive at CES 2023, with a new area in the Central Hall of the Las Vegas Convention Center dedicated to blockchain, virtual assets and the metaverse, along with ample product demonstrations in applications such as healthcare and training.

Gary Shapiro, CEO at CTA, kicked off the CES Unveiled event. He announced that, in addition to the usual showcase of innovation, the theme of the show in 2023 will be the use of technology to enhance human freedom, including a new partnership with the UN (United Nations). Examples of using tech for this purpose include the food and agriculture keynote, displays of “clean tech,” smart cities and the use of “tech for good.”

Beyond those two areas, Shapiro and Lesley Rohrbaugh, Director of Research at CTA, highlighted the following key themes and subcategories as set to be prominent at CES 2023:

John Kelly, Vice President at CTA, and Kinsey Fabrizio, Senior VP of Membership and Sales at CTA, participated in a fireside chat looking ahead to the show, further emphasizing many of the topics highlighted above.

Keynotes To Look Out For, Plus the “Best of Innovation Honorees”

CES 2023 will feature keynote addresses from executives in traditional technology sectors such as chips, as well as relatively new sectors for the show, automobiles and agriculture:

There will also be keynotes from other sectors, called the “C Space” track, including the following:

In advance of the show, CES released its Best of Innovation Honorees (listed in the image below), which typically are showcased in an area at the front of the Sands conference center.

In addition to offering advanced insights into CES 2023, CTA also covered trends to watch for Black Friday and the holiday season.

In a response to a question regarding the current excess inventory in PCs and other consumer electronics categories, Rohrbaugh commented that these surpluses would result in very attractive discounts for consumers this holiday season.

Furthermore, she announced that a recent US consumer survey conducted by CTA found that 86% of Thanksgiving-week shoppers plan to purchase tech products. The survey generally showed a willingness to shop online and offline, that consumers are generally not focusing on shopping during Cyber Week and that they do their homework online before visiting a store, though they tend to pay in traditional ways.

CES 2023 is likely to be more evolutionary than revolutionary, with one big exception: it is likely to have a major focus on the metaverse, with a dedicated area in the Central Hall likely to show a wide variety of related applications, tools and infrastructure. We are also likely to see a plethora of metaverse gadgets in the Unveiled, Pepcom and Showstoppers product showcases.

We expect to continue to see progress in health tech—evolving beyond the simple wearables of yore—with more applications in health, wellness and sleep tech, as well as more advanced wearables.

Finally, we observe that the prior focus on autonomous cars—which have not yet been perfected—has evolved into a general mobility category, which includes drones and marine vehicles.