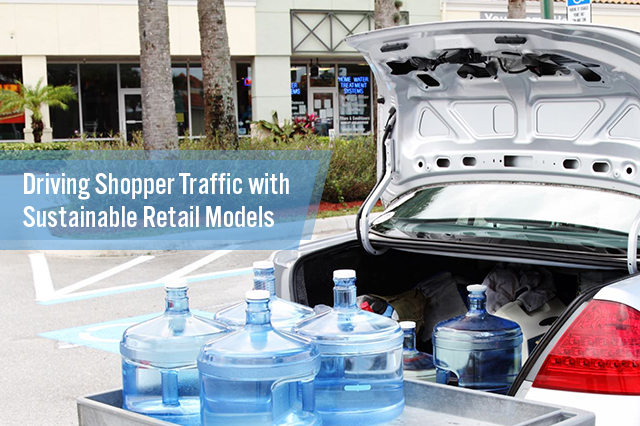 In this report, we look at the growing importance of sustainability in retail, and offer a case study of a sustainably positioned retail business — Watermill Express. We also analyze the results of a survey of Watermill Express customers on shopping behavior and characteristics.

Sustainability is becoming ever more central to retail as increasing numbers of consumers pay attention to how products are made, and purchasing decisions are increasingly influenced by ethical and sustainability factors. The trend is supporting shifts by consumers to alternatives such as resale and rental, and it is prompting retailers to respond with changes across the supply chain, from how they source to helping consumers recycle.

Coresight Research’s coverage of sustainability has recently included our report on the role of cleantech in retail and our deep dive on the importance of sustainability and social values in the luxury market. With this report, we continue our coverage of sustainability with a case-study on Watermill Express, a supplier of drinking water and ice whose model based on offering a more environmentally friendly way to buy water than single-use small bottles from regular retail stores: Customers bring their own reusable containers to a dispensing location, reducing the packaging waste associated with bottled water; and the company uses a 12-step process to purify water from a municipal water source, reducing its environmental impact.

In this report, we analyze the results of a survey of Watermill Express customers, to understand their shopping behavior and characteristics. We begin by discussing the growing importance of sustainability in retail and the scale of the challenge to “green” the bottled water industry.

Survey after survey suggests that consumers, and often younger consumers, are interested in environmental responsibility across the retail supply chain. According to a 2018 US survey by business applications firm CGS, half of males aged 18-34 and women aged 18-24 and 34-55 consider ethical manufacturing a buying factor. CGS found that 40% of respondents expressed interest in the ethics of products. Half of millennials, 45% of Gen Xers and 40% of baby boomers said they would pay more for a sustainable product.

Similarly, a 2018 survey by the Natural Marketing Institute found 64% of millennials and 51% of Gen Xers would buy environmentally friendly and sustainable products if they were more available. The Natural Marketing Institute found that millennials are 28% more likely than others to say they will pay more for sustainable and ethically produced products.

Plastic waste is rapidly moving up the sustainability agenda. According to nonprofit organization the 5 Gyres Institute, cited by National Geographic, in 2015 there were 5.25 trillion pieces of plastic debris in the oceans, with 269,000 tons floating on the surface and four billion plastic microfibers per square kilometer littering the ocean. National Geographic also estimates that 79% of product packaging ends up in landfills, and predicts that by 2050 there will be 12 billion metric tons of plastic in landfills.

According to the 5 Gyres Institute, a 2018 Mintel study found that 29% of those who buy bottled water recognize that this habit is bad for the environment. And, one in four people stopped buying bottled water because the containers are made of plastic.

The US Bottled Water Industry: Scale and Impact

In the US, bottled water is a growing business — despite apparently growing concerns about the environmental impact. According to the International Bottled Water Association (IBWA), in 2017:

The IBWA found that single-serve plastic bottles accounted for 69.5% of bottled water volume in 2017, with retail bulk purchases contributing a further 8.7% and home or office delivery 10.6%.

So, how much waste is all this creating?

The IBWA states that polyethylene terephthalate (PET, a type of plastic) bottled water containers account for less than 0.25% of the US waste stream. And it says that the amount of water and energy used to produce bottled water in North America is less than that needed for all other types of packaged beverage. The IBWA also points to efforts by brand owners to reduce the amount of plastic used per bottle and increase recycling rates.

According to the US Environmental Protection Agency, using data from the American Chemistry Council and the National Association for PET Container Resources, the recycling rate of PET bottles and jars was 29.9% in 2015.

And, worldwide, one million plastic bottles are used every minute, on average, according to analysis of Euromonitor International data by The Guardian in 2017.

The ongoing strong growth in bottled water sales seems at odds with growing consumer concern over plastic waste — though this discrepancy can be partly accounted for by consumers switching from other packaged beverages to water due to health consciousness. Should momentum continue to grow for more sustainable ways of retailing and consuming, the bottled water industry may face further pressures to act more sustainably.

In the following sections of this report, we focus on the shopping behaviors and characteristics of Watermill Express consumers. We look at the types of consumers using this business model, how often they visit and whether they had visited, or planned to visit, other stores on their latest trip.

The survey findings suggest that sustainably positioned business models, outside of regular retail formats, can support traffic and drive-cross-shopping at retailer cotenants.

The survey was undertaken across seven locations in two areas: Las Vegas and Houston, Texas.

At the lower end, this segment includes millennials who are seeing their incomes grow and are establishing households and who, it is often suggested, are more environmentally conscious. At the core of this 26-55 age group lies the more established family-lifestage demographic — meaning many in this age group will be managing substantial family budgets across a number of store formats and categories.

From our survey data, we estimate the average Watermill Express customer is aged 39.7 years, with relatively little difference between Las Vegas (40.5 years) and Houston (38.8 years).

We asked respondents where they used to buy water or ice before they started buying from Watermill Express.

Three in 10 said they had switched from a supermarket or another large store, and one in 10 had switched from a convenience store. These findings imply that Watermill Express’s “refill” model has attracted substantial numbers of shoppers from conventional bottled water sold in retail stores — and this could reflect environmentally concerned shoppers switching to an alternative that generates less plastic waste.

The findings also confirm a degree of loyalty to the brand, with four in 10 saying they were previously buying from this brand at another location.

We asked those buying water or ice why they made a trip to a shopping center and fully 78% said that it was to visit Watermill Express. Only 22% said it was to visit another establishment.

Our data suggests Watermill enjoys stronger appeal in some regions: among Las Vegas customers, 91% said their primary reason for the trip was Watermill; among Houston customers, 65% stated Watermill was the driver.

The traffic that Watermill Express generates extends to other retailers in the centers in which it operates, confirming that sustainable models outside of conventional retail formats can drive shopper traffic and cross-shopping at nearby retail stores.

Some 30.3% of Watermill Express customers said they had visited, or expected to visit, another establishment at the shopping center they were visiting on the day we surveyed them. Coupled with the finding that 78% of customers made their shopping trip specifically to visit Watermill Express (see above), this suggests the brand drives significant volumes of regular traffic to nearby retailers and service providers.

Our survey asked respondents about the shopping trip that they were making at the time of the survey only, so the high frequency of visits to Watermill (shown above) helps explain why a minority of customers visited other establishments on their latest trip: with an estimated average six visits per month, many consumers will not see a need to visit other stores on each visit.

Over an average six trips per month, we expect the monthly cross-shopping average to be considerably higher than the per-trip figure of 30%. On the assumption that 30% of all Watermill Express customers cross-shop on each trip and based on an average six visits per month, our data suggests the average Watermill Express customer makes around 1.8 cross-shopping trips to other establishments in the same shopping center per month.

Watermill Express is an example of a sustainability focused brand attracting shoppers, in turn driving shopper traffic to nearby stores.

Sustainable models can drive shopper traffic: Our survey data confirms that sustainable models can drive shopper traffic and cross-shopping at nearby retail stores. The survey found Watermill Express locations attract frequent shopper visits; and 30% of Watermill Express customers claimed to cross-shop at other stores or service providers on their latest trips. Once we average over a multitrip period, we expect cross-shopping rates to be meaningfully higher.

A total of 814 respondents were surveyed face to face in seven locations in Las Vegas and Houston, between December 2018 and February 2019. Total respondent numbers were split 402 in Las Vegas and 412 in Houston. The findings represent the views of those who bought from Watermill Express. Total figures and the breakdowns by region have a margin of error of 5% with a 95% confidence interval.