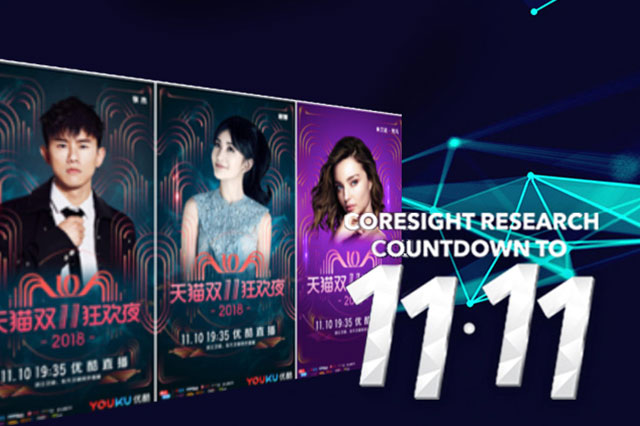 Alibaba’s 11.11 Global Shopping Festival, also known as Double 11 or Singles’ Day, takes place on November 11 every year and it has become the world’s biggest 24-hour online sale. This is the concluding report in our series covering the various shopping festivals and developments in New Retail in the lead up to this year’s Double 11.

The Double 11 Global Shopping Festival Is Just Around the Corner

We are now just three days away from Double 11, also known as Singles’ Day and 11.11. The shopping extravaganza is held every year on November 11 and has become the benchmark of Chinese consumption. This is the concluding report in our series covering the various shopping festivals and developments in New Retail in the lead up to this year’s Double 11.

We believe this year’s Double 11 will be powered by Alibaba’s New Retail, which is about the seamless integration of offline and online retail, besides achieving recording-breaking sales figures.

Focus on New Retail: This year, Alibaba will be showcasing its New Retail initiatives and it will be seen how the company’s investments and partnerships with physical retailers play out. At this year’s edition of the event:

We are seeing a much higher number of offline stores participating, which will further boost New Retail initiatives.

Foreign Goods’ Consumption: This year’s Double 11 will be of an unprecedented scale with 180,000 global and Chinese brands participating. In addition to that, Tmall Global will offer 3,700 categories of imported goods from 75 countries and regions to encourage cross-border sales.

Despite the prevailing fluid macroeconomic conditions, we expect Chinese consumers’ spending on imported goods to continue growing this year, thanks to their aspirations for high-quality products. Even the 2017 edition of Double 11 saw impressive consumption of foreign merchandise and data from Azoya, a Chinese e-commerce solutions provider, show that during last year’s Double 11:

The 11.11 Countdown Gala—which will be held in Shanghai this year—will start in the evening on November 10 and lead up to the event’s midnight launch. The show has been broadcast on live TV since 2015 and this year’s gala will be broadcast live nationwide on platforms including the Taobao and Tmall apps, social media platform Weibo, news aggregator Toutiao, Youku.com and two domestic TV channels.

Like in previous years, even this year’s gala will be a mix of entertainment and variety shows blended with New Retail. The domestic and international celebrities at the show will include Miranda Kerr, Zhang Jie, Xie Na, Luo Zhi Xiang and Angelababy. In previous years, international artists such as Katy Perry, Nichole Kidman and Jessie J, and renowned athletes such as David Beckham, Maria Sharapova and LeBron James have participated in the curtain-raiser, along with vast Chinese audiences, to witness Double 11’s launch. 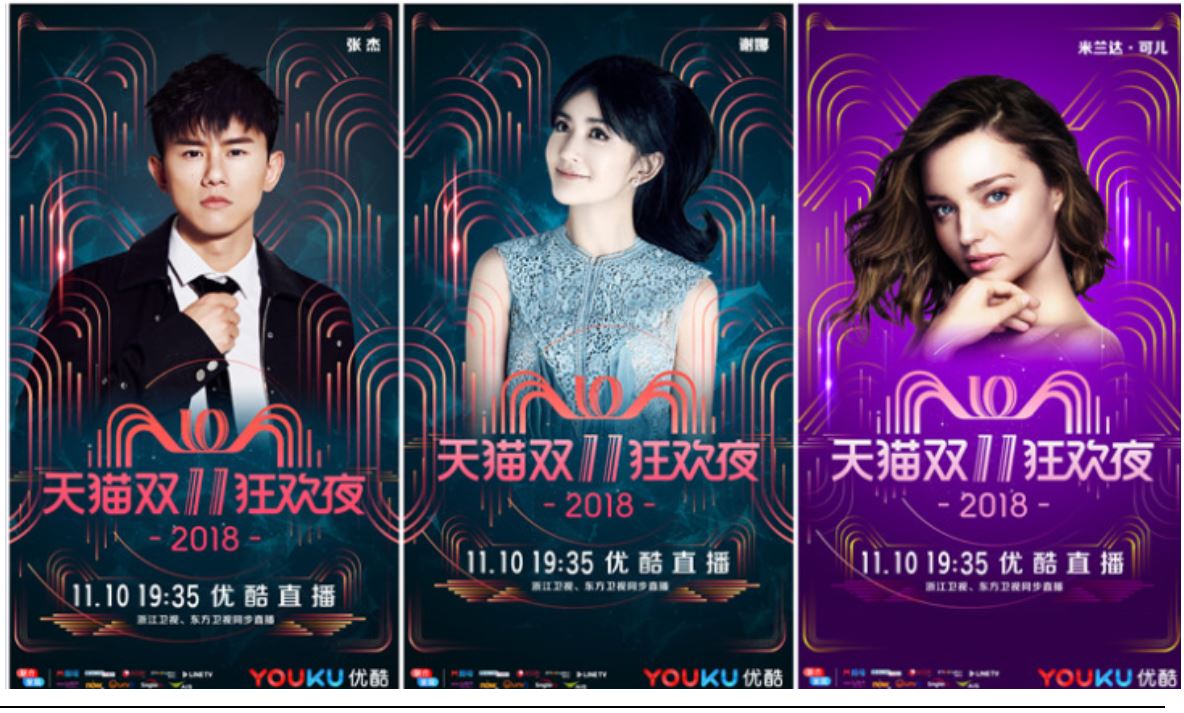 As in previous years, even this year’s countdown gala centers on audience interaction. The participating celebrities will be divided into two teams, Red and Blue, for four rounds of battle. Before the start of each battle, the audience can bet on their favorite team through the Taobao, Tmall and Youku apps. Those who bet on the winning team in each round can further win a chance of buying any product at ¥1 (USD0.15) and will also get a key to unlock the grand prize. From those who win all four keys after the battles, one final winner will be selected to win the grand prize of 1,111 gifts from 1,111 brands on Tmall Global.

The 11.11 Countdown Gala will continue to raise the passion, which has already been built up by pre-sales activities, to drive the shopping cart through Tmall once the clock strikes midnight on November 11.

In our previous report in this series, we noted that that the 3C Products (computer, communication and consumer electronics) and Home Appliances category had ranked second in Tmall’s Double 11 pre-sales chart for October 20–22. This week, the category has climbed up to first place by registering ¥6.88 billion (US$1 billion) sales in the period October 20–31, according to data company ECdataway. Beauty and Personal Care has dropped one place to become the second-highest sales category with sales worth ¥5.82 billion (US$0.85 billion) in the same period. 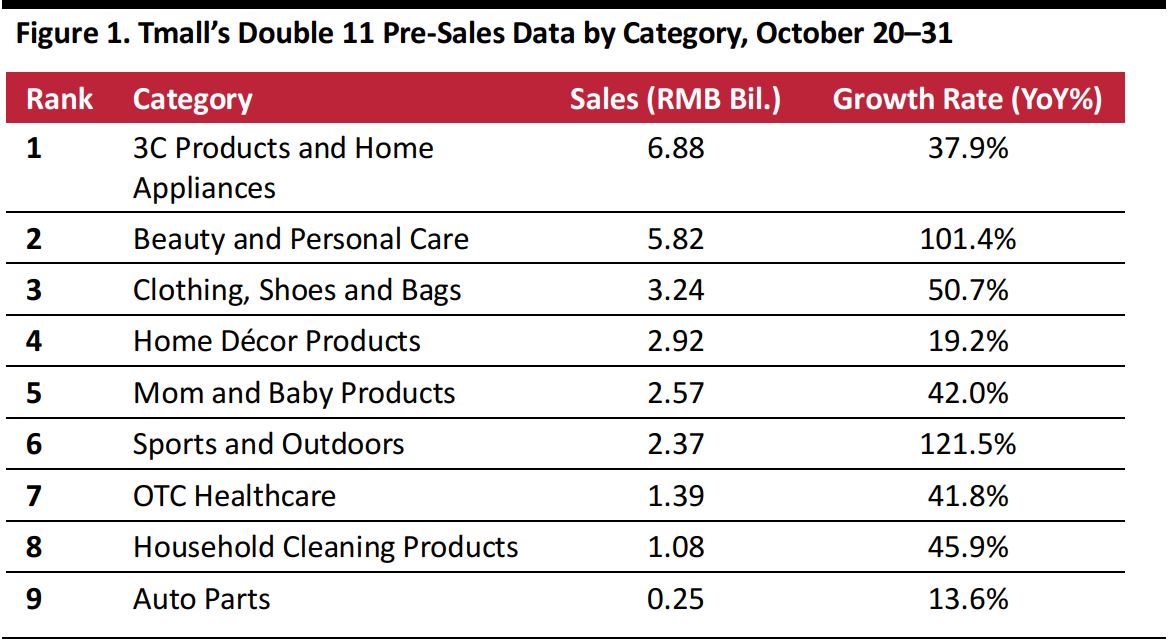 According to 100EC.CN, a Chinese e-commerce intelligence website, nine brands in the 3C Products and Home Appliances category had already achieved impressive sales of over a hundred million Chinese yuan as of November 2 in the pre-sales period starting October 20. These brands are Apple, Huawei, Haier, Xiaomi, Midea, Siemens, Gree, Dyson and Ecovacs Robotics. For Apple and Huawei, their latest phone models—iPhone X and Mate20 Pro—alone also registered over a hundred million Chinese yuan in sales during pre-sales.

Alibaba and YOOX Net-a-Porter, a subsidiary of luxury conglomerate Richemont, have announced the launch of a joint venture to connect with China’s luxury shoppers. In the partnership, two mobile apps—Net-a-Porter for women and Mr Porter for men—will be launched for Chinese customers, and Net-a-Porter and Mr Porter will also launch online stores on Tmall’s Luxury Pavilion.

This is another major move by Alibaba in the luxury market following its launch of the Luxury Pavilion on Tmall in 2017. Having luxury brands online is an embodiment of Alibaba’s New Retail push where one sees an integration of online and offline commerce.

The partnership reflects brands’ recognition of the untapped potential of China’s luxury market and conviction of its strong growth in the near future. According to McKinsey & Company, Chinese consumers are expected to account for nearly half of the global luxury market by 2025.
This and other New Retail developments in China are listed in Figure 2. 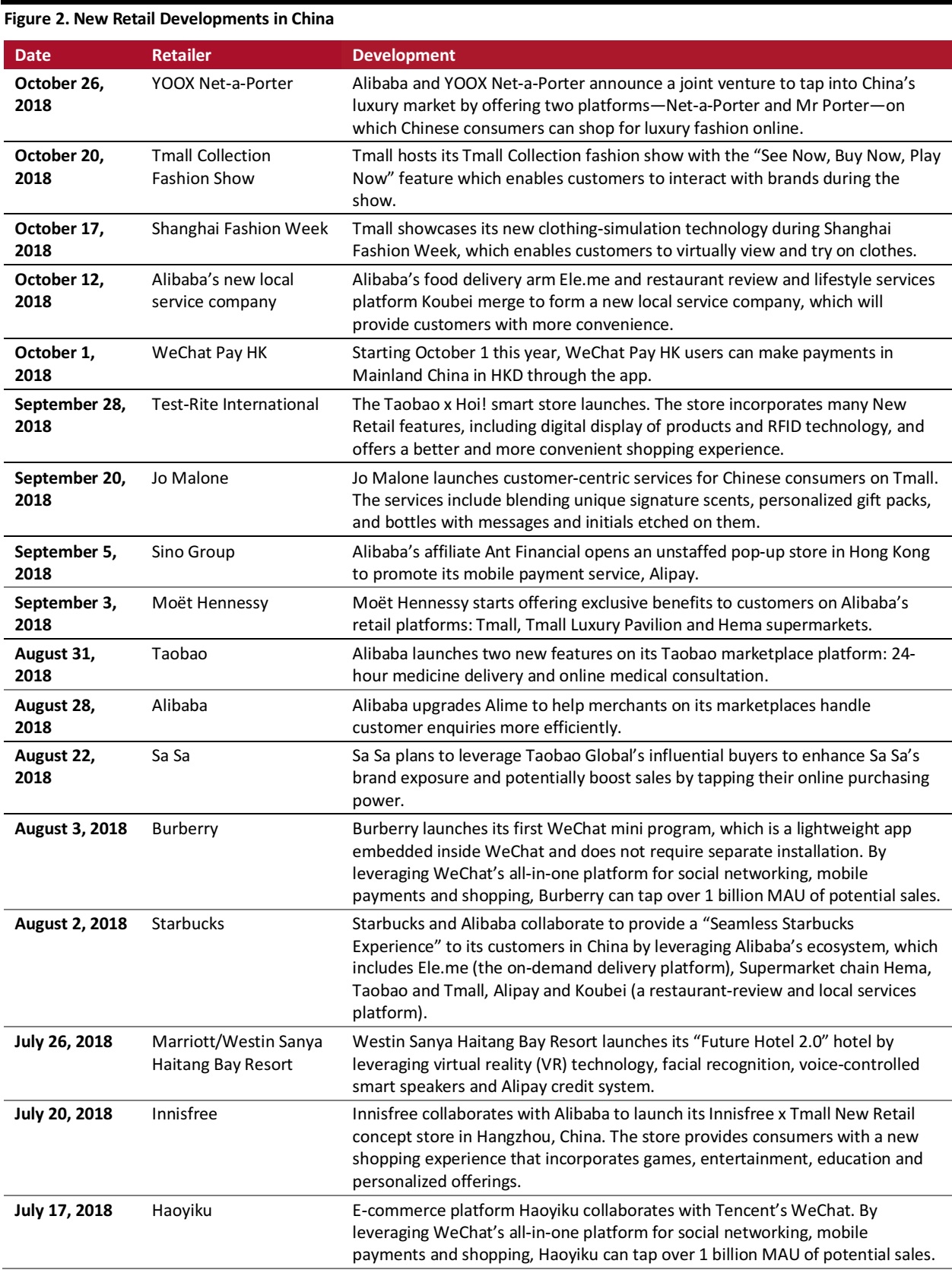 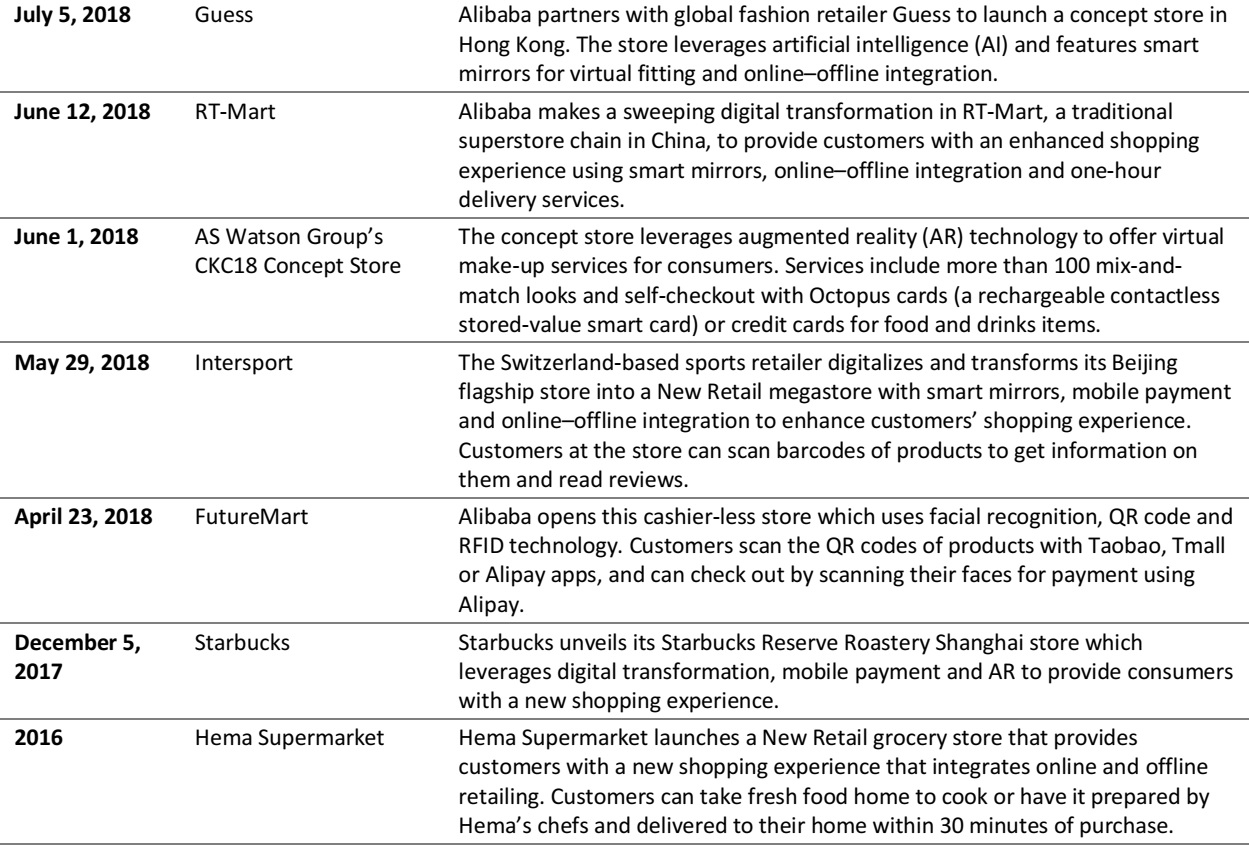 Investments and Acquisitions in New Retail

To expand their New Retail capacities, Alibaba, Tencent and JD.com have invested in logistics firms, online marketplaces, content creation companies, brick-and-mortar stores, etc. Listed in Figures 3, 4 and 5 are recent investments of and acquisitions by these companies, along with investment dates, investees and the industry segments they are in, and funding details. 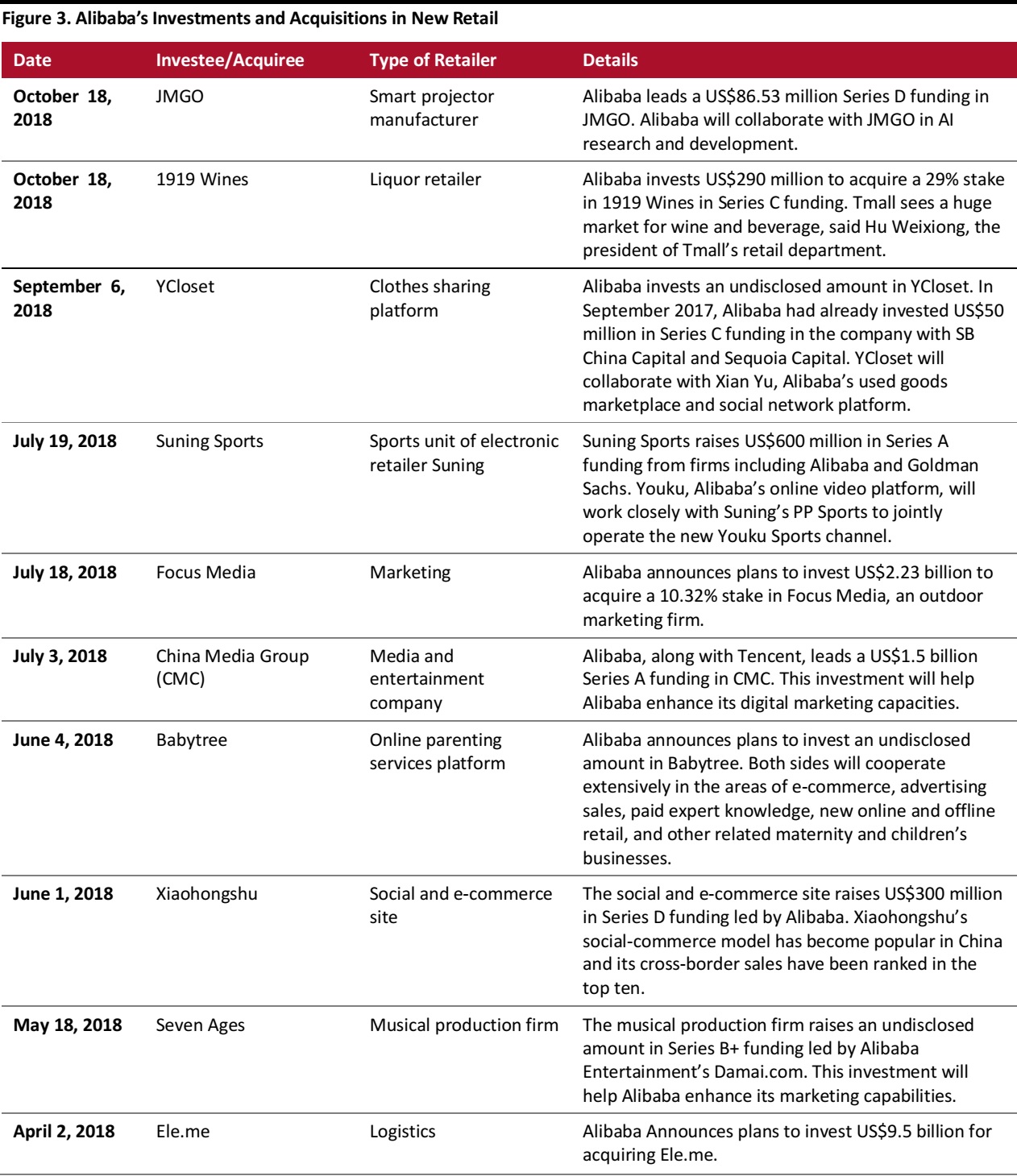 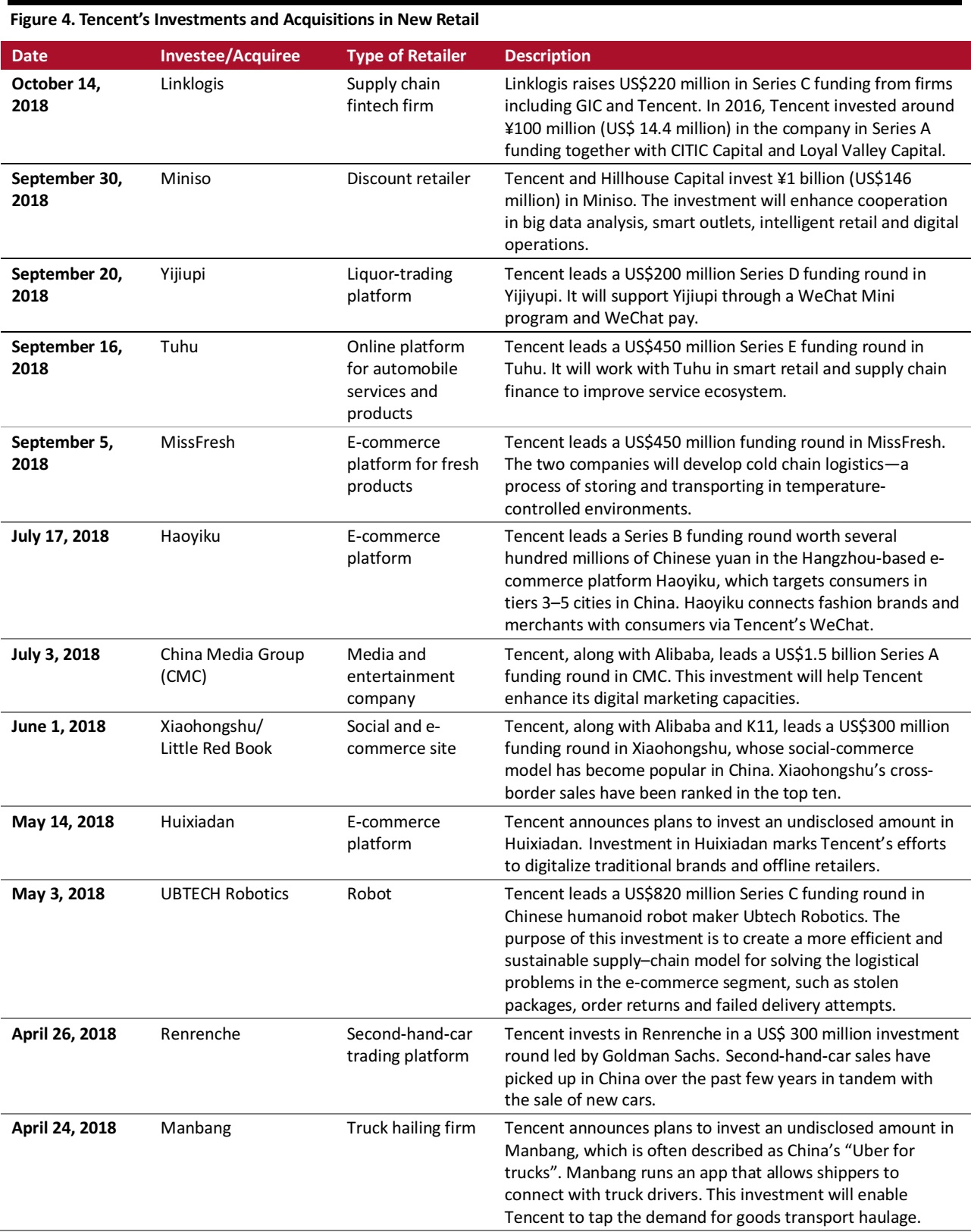 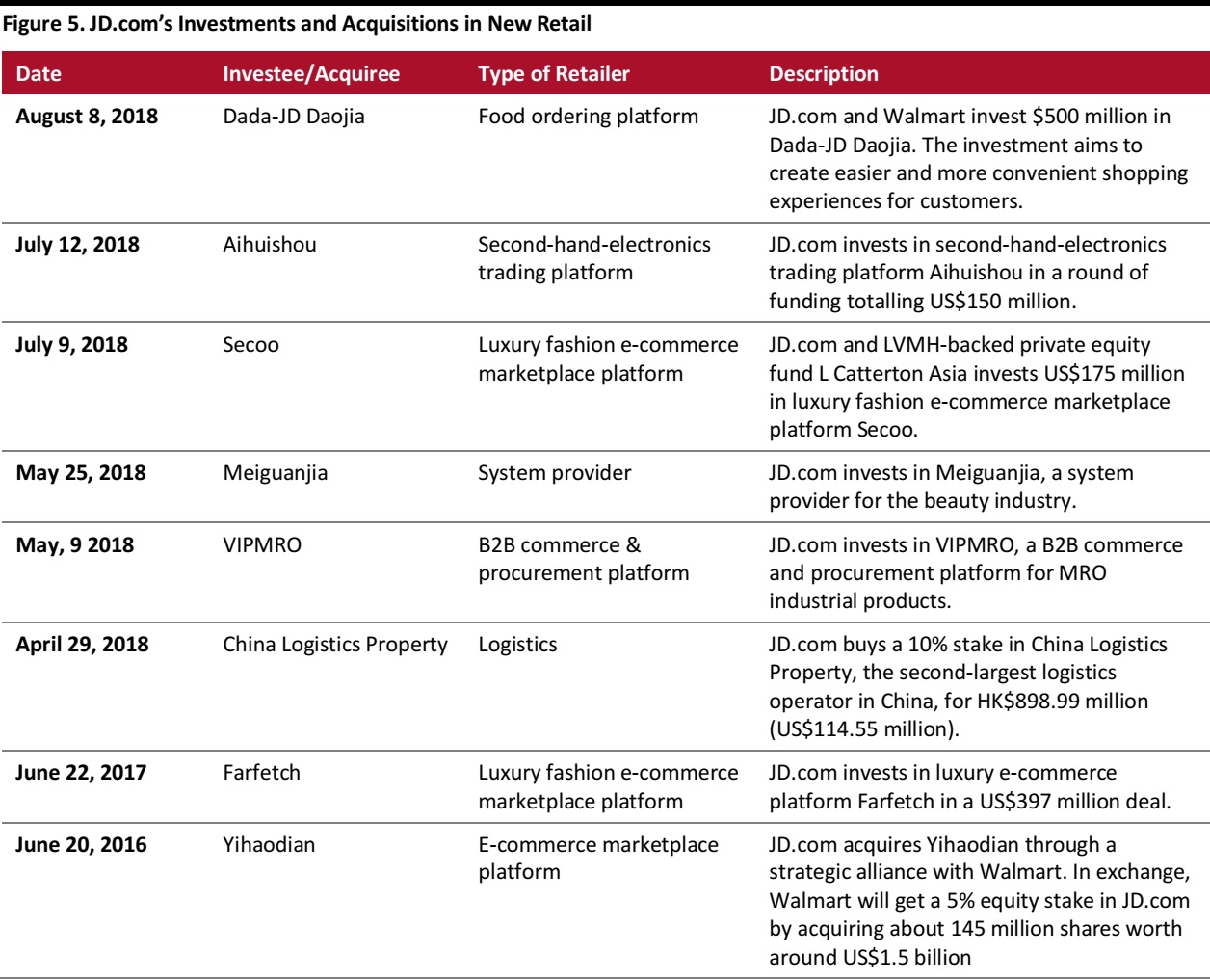