In collaboration with competitive intelligence provider DataWeave, we aggregated data on more than 1 million women’s and men’s clothing products listed on Amazon.com. This report offers an update to, and comparison with, identical research that we undertook in February 2018.

We continue our coverage of Amazon’s expansion into apparel categories with an updated breakdown of its US fashion offering. In this report, we offer an exclusive analysis of Amazon’s US clothing offering on its Amazon Fashion site.

In collaboration with competitive intelligence provider DataWeave, we aggregated data on more than 1 million women’s and men’s clothing products listed on Amazon.com (Amazon’s US site). In the sections that follow, we cut and slice that data by brand, product category and type of seller (first-party versus third-party).

In Brief: How We Got Our Data

Our data cover women’s and men’s clothing on the US Amazon Fashion site. We aggregated data in two stages:

Fuller details on methodology are included at the end of this report. We begin by pulling out four trends from our latest research.

Across menswear and womenswear, we recorded a total of 1,121,681 individually listed products on Amazon Fashion in September, compared with 881,269 when we conducted identical research in February. Excluding out-of-stocks, our latest research recorded 1,081,164 listings.

Amazon’s apparel offering continues to be dominated by products offered for sale by third-party merchants. As Amazon builds its fashion offering through partnerships with brands and the expansion of its private-label offering, one might expect the share of clothing offered by those third-party sellers to fall. But, in fact, we have seen the opposite: items listed by third parties now account for a greater share of the offering than they did when we conducted our previous research:

The lackluster growth in first-party listings comes despite Amazon’s increasing emphasis on apparel, including its tie-ups with certain major brands and the expansion of its private labels.

In just over six months, we have seen significant brand shifts on Amazon Fashion. We chart changes in listings for the very biggest brands below and offer discussion points following the graph. The brands under discussion all ranked within the top 30 by number of products listed, either in February or September (and, in many cases, in both months). 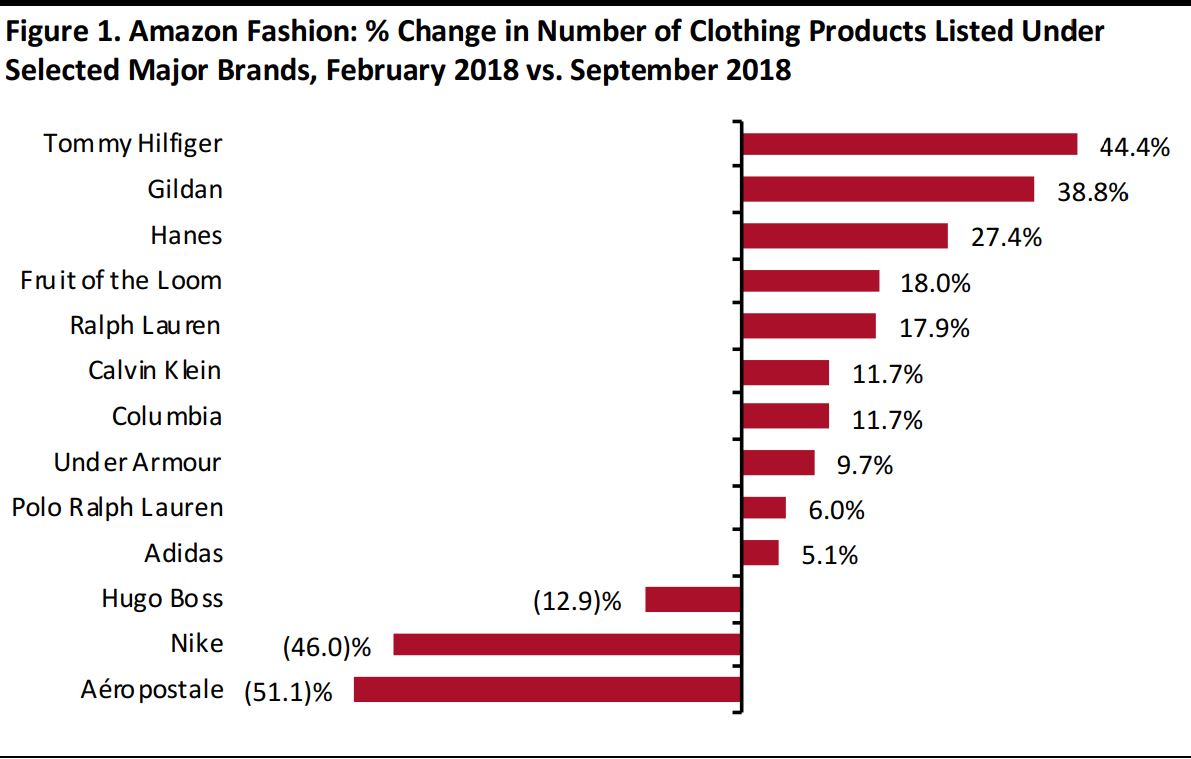 When we compared February and September listings on Amazon Fashion, we found that:

Below, we show first-party listings only (i.e., products sold by Amazon itself) for selected major brands, to show the extent to which Amazon’s own listings have driven these changes. 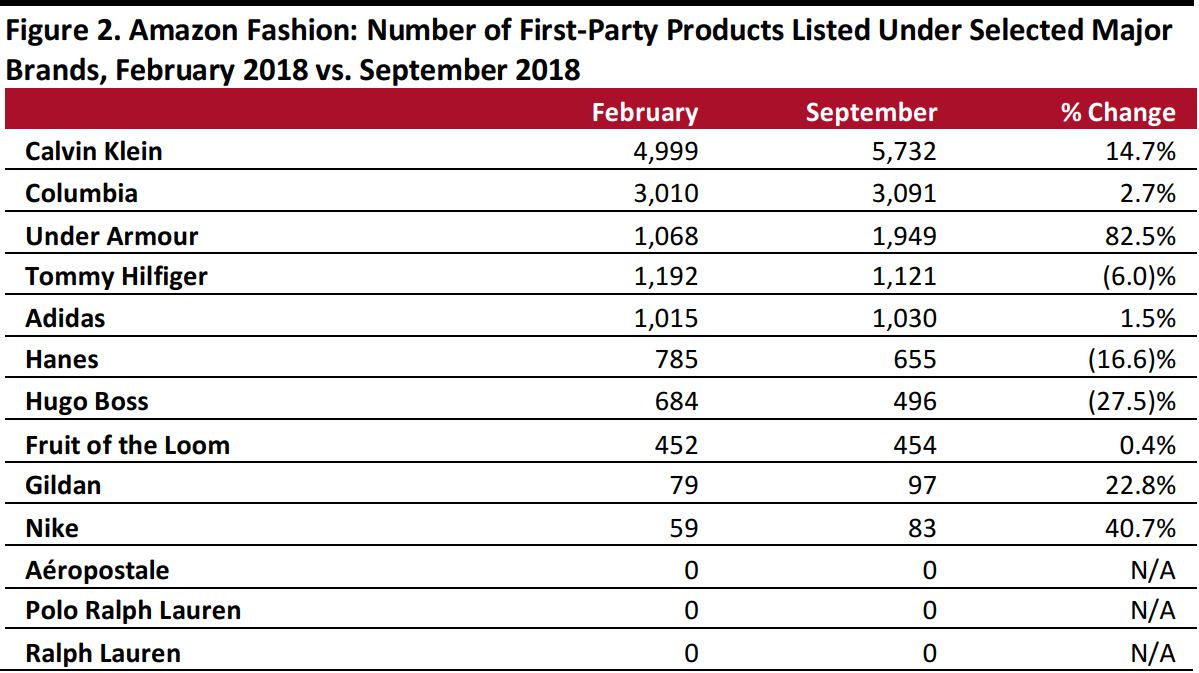 Amazon built much of its early success in apparel on sportswear. This category heaves with brands that enjoy widespread appeal and that consumers often buy based on specification (brand, sub-brand, collection, etc.). These characteristics make sportswear an ideal launchpad for apparel e-commerce. Amazon’s sportswear offering was supported by many third-party sellers that were willing to sell these goods—including those from brands’ suboptimum ranges or, in some cases, branded sportswear apparently sourced via the gray market.

With maturity comes a shift in focus, and Amazon now appears to be rebalancing, moving from an emphasis on sportswear to a fashion offering that includes more substantial formal ranges.

Below, we break out the percentage changes in product listings by subcategory within women’s and men’s clothing between February and September 2018. Seasonal variations may partially account for some of the changes, but we note a rebalancing from sportswear to more formal categories such as suiting and blazers that appears to be unrelated to seasonal trends. 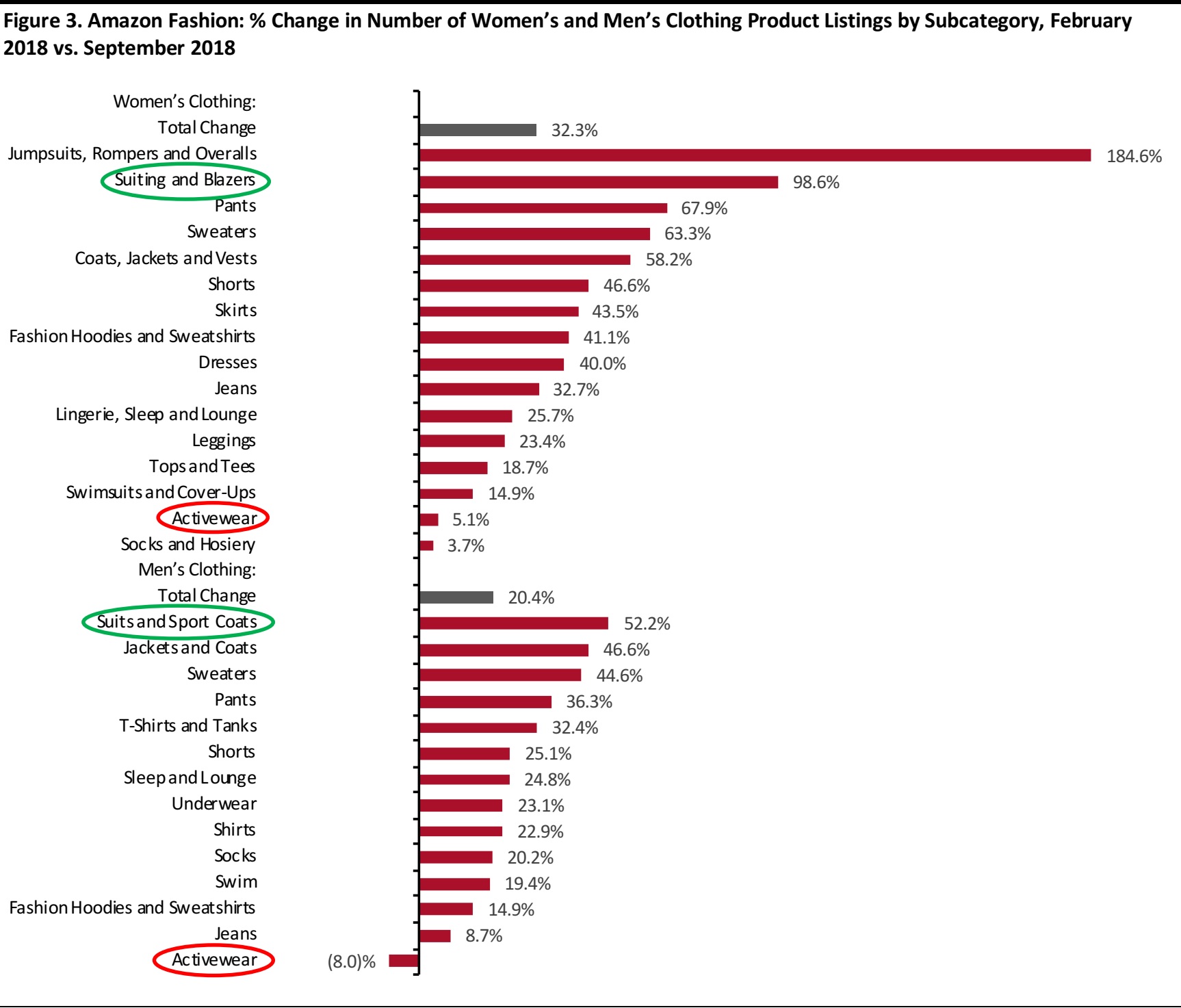 4. Amazon.com Is Outnumbering Macys.com on Some Brands…Even on First-Party Listings Alone

To place some of these figures in context, we compared a handful of brand listings on Amazon.com to the offering on Macys.com, the Macy’s US site, on October 22, 2018. Macy’s is America’s second-biggest apparel retailer after Walmart, and it offers a better comparison with Amazon Fashion than Walmart does because its offering is much more brand-heavy. Our data for Macys.com exclude footwear and accessories, as these are not included in our Amazon data.

If we focus only on first-party listings, we see a mixed picture: Amazon.com offers many more products from brands such as Calvin Klein than does Macys.com, but far fewer Nike brand products. If we include third-party listings, Amazon.com is comfortably ahead of Macys.com on all the brands listed.

It is clear that Nike’s deal to sell selected products via Amazon (with Amazon as the seller) remains highly limited in scope, as Amazon itself was selling only 83 Nike products on its site when we undertook our research.

A host of major brand names once again feature prominently among the most-listed clothing brands on Amazon Fashion. However, in the past half year, low-price generic brands have made a major incursion into Amazon’s listings, and these anonymous, often-imported goods are swamping the branded offering.

A number of major brands have changed places in the rankings since we undertook identical research in February: 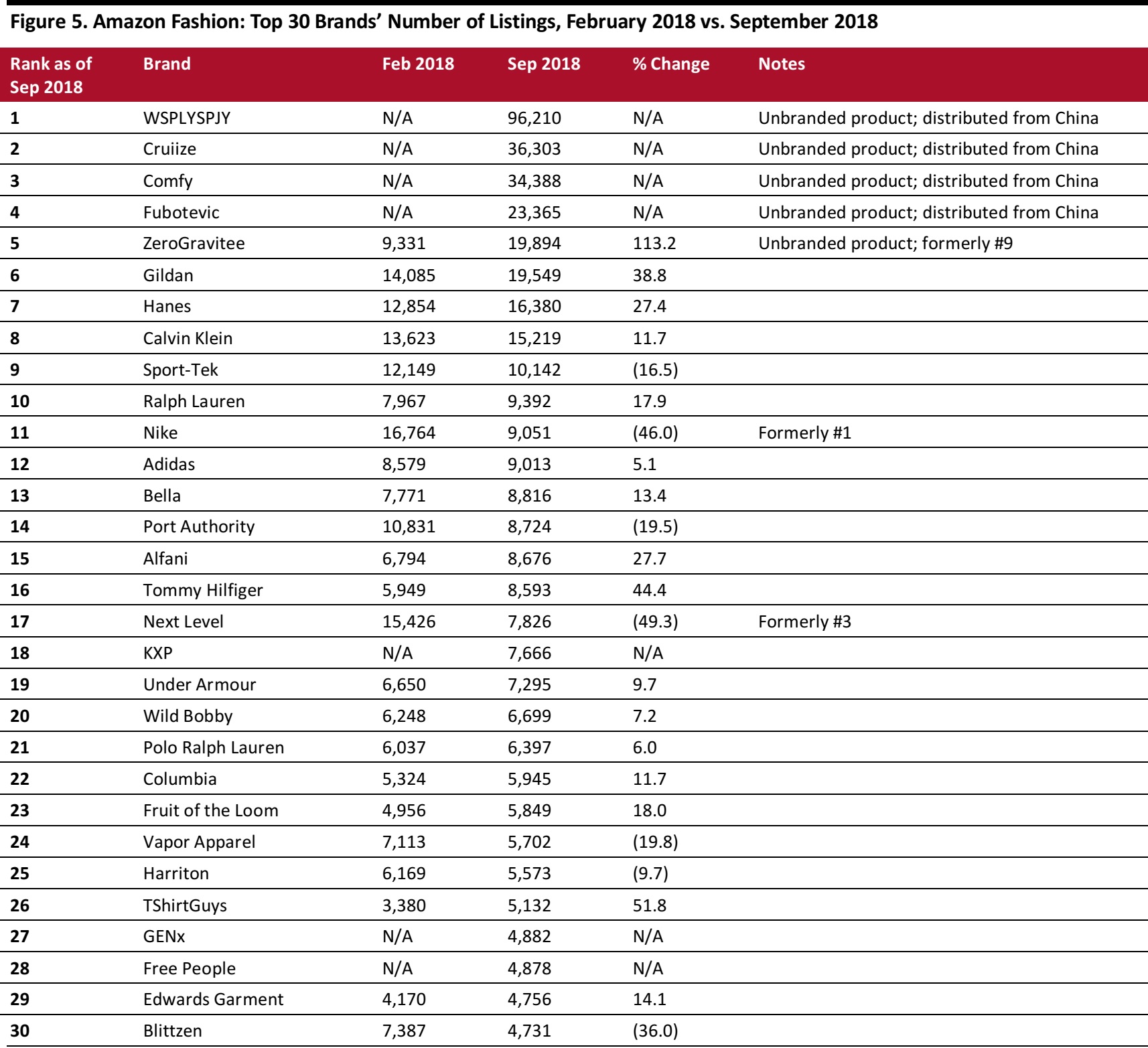 Our research found 676,971 women’s clothing items and 444,710 men’s clothing items listed on Amazon Fashion, yielding a womenswear-to-menswear ratio of 1.5 to 1.This compares with a ratio of 1.4 to 1 when we last undertook this research, in February 2018. A 32.3% jump in women’s clothing listings between February and September has driven that change, and the increase in womenswear listings has outpaced the 20.4% increase in menswear listings. Below, we chart the number of listings per subcategory based our September research. 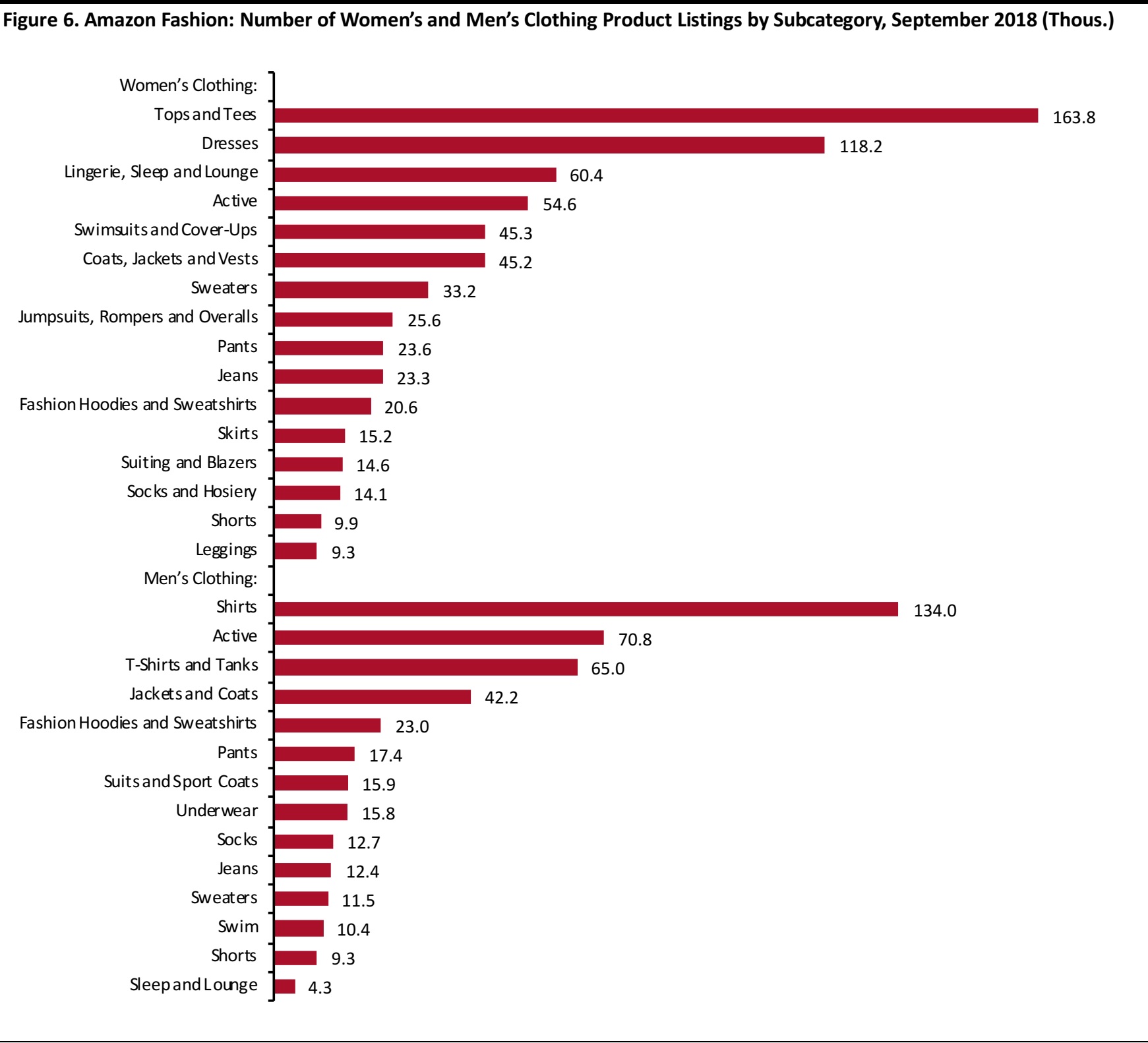 We provide a rundown of the top 30 brands listed on Amazon Fashion below, including a breakout by first-party and third-party listings. As we noted earlier, generic brands now dominate the top spots in this ranking. 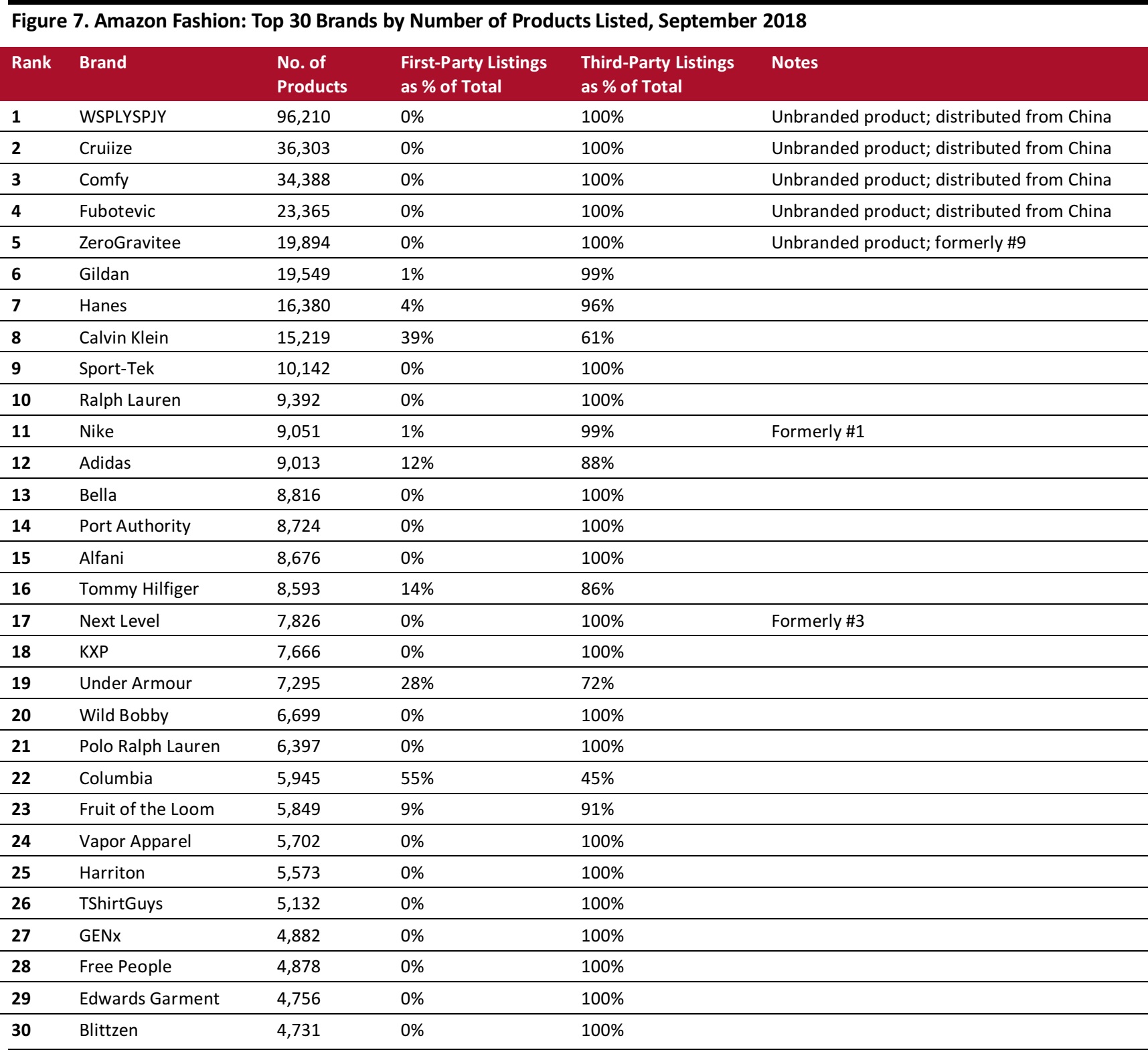 Total listings include a small (low single-digit) proportion of out-of-stocks. Percentages are based on first-party and third-party totals for items in stock.
Source: DataWeave/Coresight Research

Our research has uncovered some indications that Amazon’s fashion offering is maturing:

At the same time, a number of indicators suggest that key facets of Amazon’s apparel offering have not substantially changed, even though the company has apparently sought to position itself as a more credible retailer of fashion:

So, while Amazon Fashion shoppers enjoy much greater choice than they did even six months ago, we think a greater emphasis on first-party listings would strengthen the retailer’s appeal:

A Note on Methodology

We conducted our research in two stages. Stage one involved identifying brands listed on Amazon.com:

Stage two involved searching for listings under those brands:

Powered by proprietary AI, DataWeave provides actionable competitive-intelligence-as-a-service to retailers and consumer brands in near real time by aggregating and analyzing data from the web. While retailers use DataWeave’s Retail Intelligence product to make smarter pricing and merchandising decisions and drive profitable growth, consumer brands use DataWeave’s Brand Analytics product to protect their brand equity online and optimize the experience delivered to shoppers on e-commerce websites. For more information, visit www.dataweave.com.